A SYMBOL OF MARITIME HISTORY

There couldn’t be a more beautiful link between the past and the future than the ceremonial canoe built in just 21 days in 1810. The Emperor’s canoe is a flagship work in the National Maritime Museum’s collection, whose elegant silhouette emerges at the entrance to 70.8 and impresses visitors with its dimensions (almost 19m long) and history.

The story started in Antwerp, Belgium.

On April 30, 1810, the ceremonial boat made its grand debut in Antwerp with Napoleon and the young Empress Marie-Louise on board. A veritable naval procession surrounded them. For several days the canoe transported the Emperor, who was visiting his ships and inspecting his entire fleet. In 1814 and with the fall of the Empire, the canoe found refuge in the military port at Brest.

Destined for oblivion, the Emperor’s canoe could have ended up under the bombs that destroyed Brest during World War II, but we believe that the fate of the canoe was not to end in such an ignominious fashion. In Paris, at the Palais de Chaillot, the National Maritime Museum had barely been completed and space was aplenty. It was decided that the imperial boat would be the flagship!

So, under the protection of the German authorities, the boat left Brest on May 9, 1943. It was first transported by barge and then moored to an SNCF railway wagon. Direction Paris Montparnasse station, an 8-day journey on tracks deliberately deserted and reserved for this exceptional convoy.

In a nod to history, in 2018 and with the approach of work to restore the Chaillot museum to its former grandeur and make it fit for the 21st century, the question of the canoe and its size became an issue! And so the canoe began its journey in the opposite direction, this time by road, 75 years later!

Back in Brest, the Emperor’s canoe has found its rightful place in the Ateliers des Capucins, subtly symbolising the extremely strong link that exists between the city, recently labelled a City of Art and History, and the Brest branch of the Maritime Museum. It is now displayed in the Ateliers des Capucins, proudly showcased between 70.8 and the propeller of the Jeanne d’Arc helicopter carrier. A true symbol of the city of Brest for generations of sailors, ‘La Jeanne’ as they say in Brest, was decommissioned in 2010 after having travelled the equivalent of 79 times around the world.

Whether you are visiting for the day or for longer, Brest is full of things to be discovered and places to see. It has undergone a metamorphosis thanks to the introduction of trams and cable cars. Brest has gradually reinvented itself. 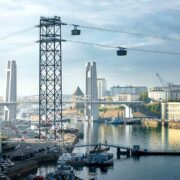